The Sea of Galilee is behind us! 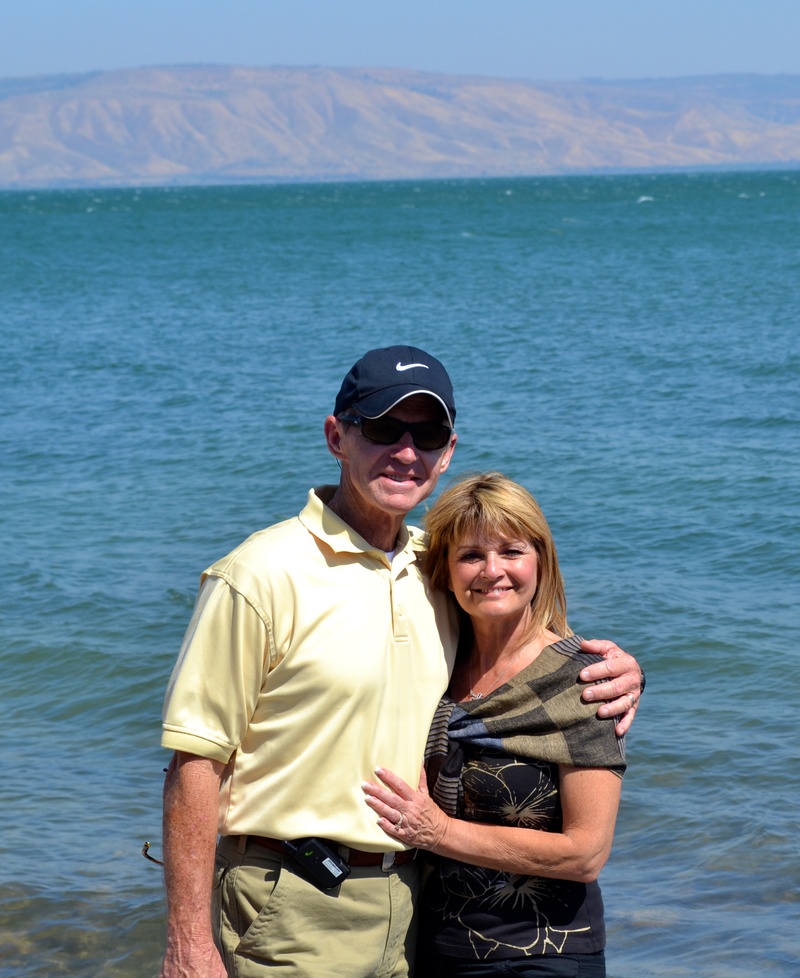 Below: Our Pastors Randy and Stacy Harvey 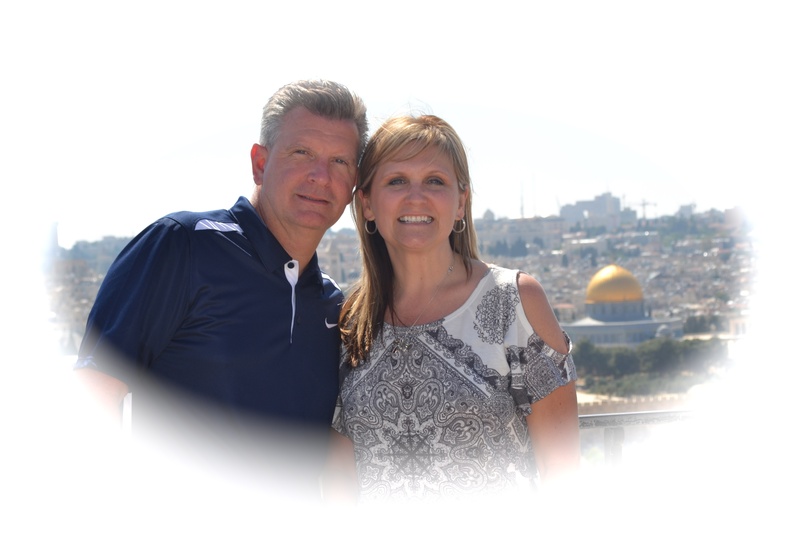 BELOW IS ONE OF FRANK'S FAVORITE SITES! Behind us, THE JEZREEL VALLEY (Valley of Armegeddon). He loves to sit on top of MEGIDDO, look out over the valley, and imagine the END TIME battle that will one day take place here! 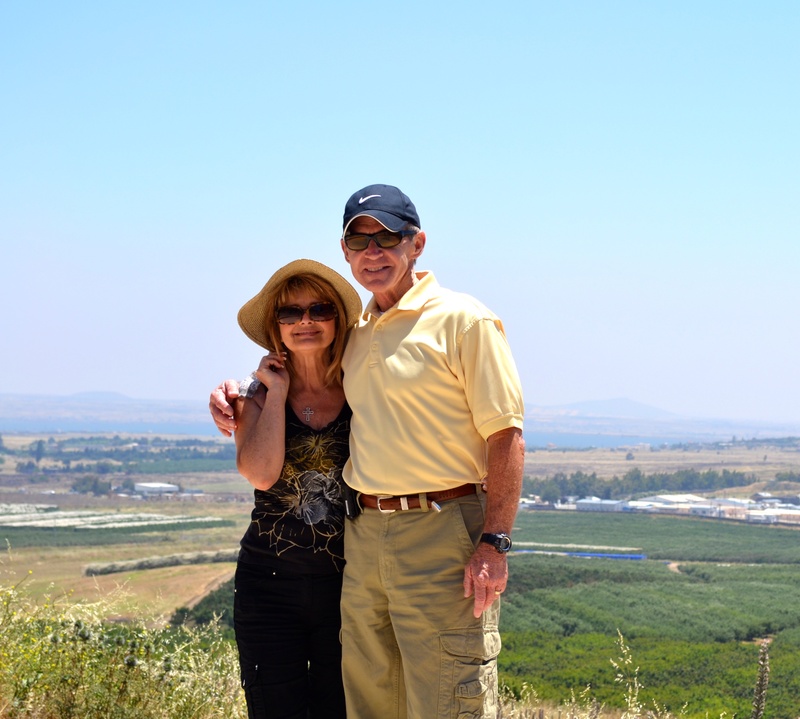 You too, can ride a camel! 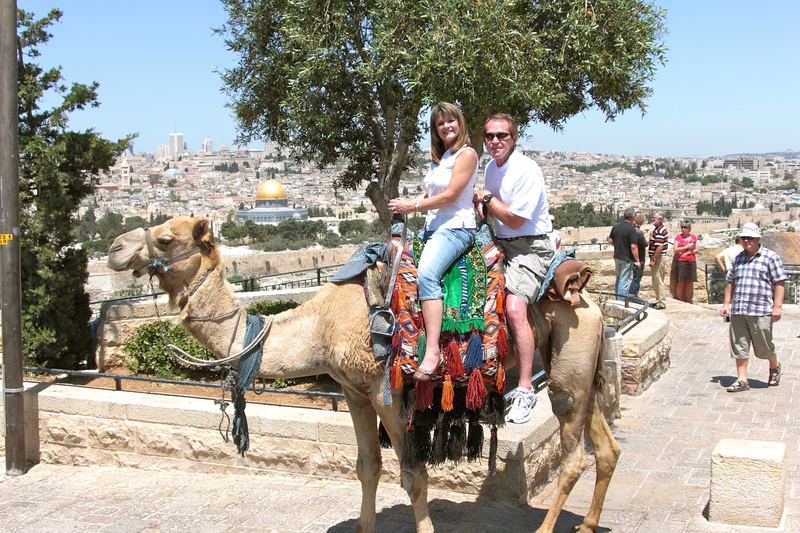 Galilee is so Gorgeous, it reminds us of Italy!

The Flowers below are an example of the beauty of the Galilee! 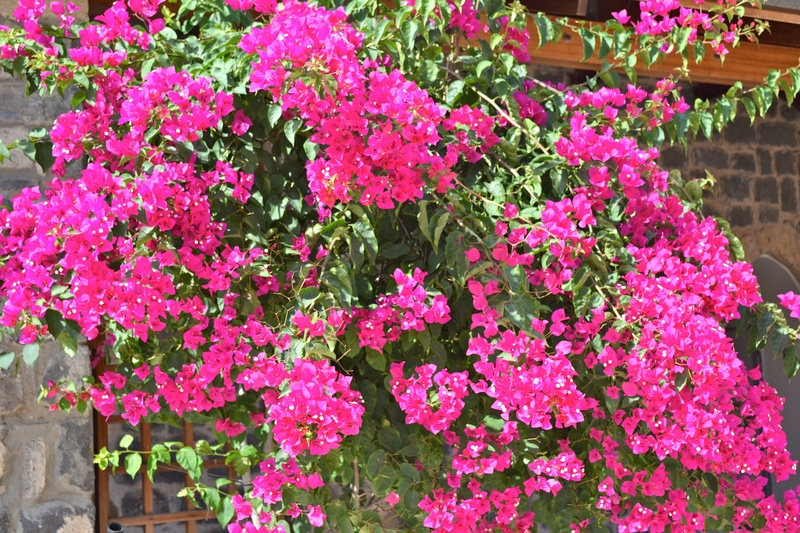 Below is beautiful TEL AVIV! Our first view of ISRAELwas from the balcony of our room in Tel Aviv. It didn't look like Israel, it reminded us of Hawaii. Palm trees, surfers in the water, it was nothing like we thought it would be. Israel is so much more beautiful than we had imagined! 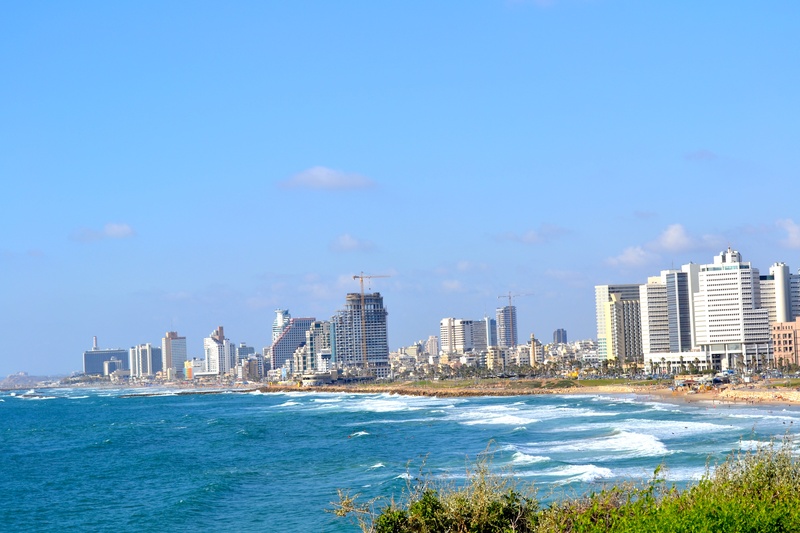 About Us and Our Vision 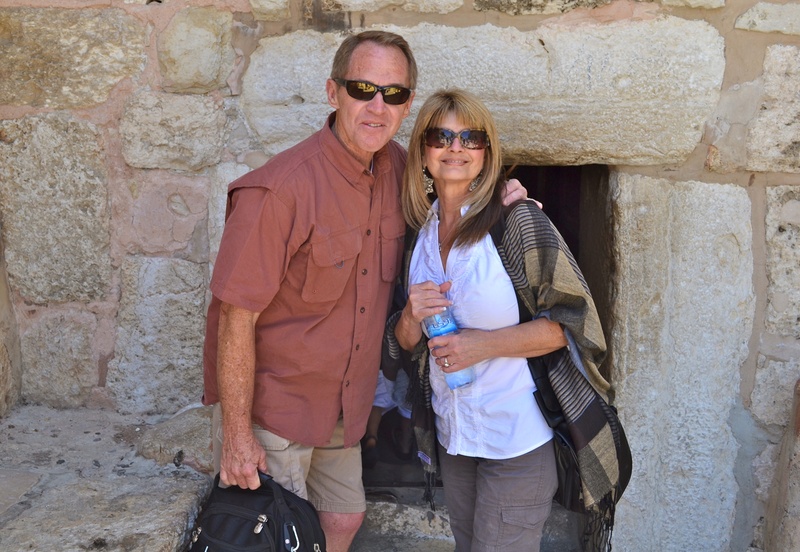 We are Frank and Sandra Young. We have been married for 47 yrs and we have 4 married children, all of whom know Jesus as their savior. Our 4 children  have blessed us with 14 precious grandchildren

. Obviously, we are well able to manage large groups of people. Frank is a retired United Airlines Pilot, a father, and the world's greatest grandfather. Sandra is a wife, mother, grandmother and gospel singer. We came to know Jesus as our Savior in 1981 (Sandra) and 1983 (Frank). Since that time we have been serving the Lord and raising our children. In 2009, we were strongly impressed to change churches and since that time God has completely redirected our life. Four months later we were in Israel, and from that time on, Israel has been our heart! We would love to introduce you to this wonderful land and the precious people of the Holy Land.

WHY DO WE GO TO ISRAEL?

God has called us to bring people to Israel to introduce them to the land and most importantly to meet the wonderful people of Israel.

In September 2006, we first toured Israel with our dear friends, Larry and Jan Wittmer. Our tour was to include a total of 40 people. However, because of the summer war between Lebanon and Israel, people were uncomfortable traveling to Israel, even though in August a cease fire had ended the violence. Our flight was on 9/11 of that year and people were also uncomfortable flying on that date because of the  9/11/2001 Twin Towers Attack. Consequently, our flight was virtually empty and Israel was almost void of tourists. We were the only people at many of the sites. It was wonderful for us, but devastating for Israel.

Arriving in Israel at Ben Gurion Airport, a small van transported us to our hotel in Tel Aviv to check-in and to await the arrival of the rest of our tour members, including our friends Jan and Larry. Our first view of the Mediterranean was from the balcony of our room. Wow! As we gazed at the the beautiful blue green water,

the shore line, and the numerous surfers, we were amazed at how similar it looked to Waikiki Beach.

Late in the afternoon, after Frank and I had taken a long stroll on the beach, Larry and Jan arrived. We shared dinner together and then took a short taxi ride to Jaffa, about a mile from the hotel. Jaffa is a beautifully restored stone city. As we walked the ancient streets, we felt we had been transported back in time, to the days of the bible. A nice teaser to what we could expect over the next 8 days.

Much to our surprise, coming down the next morning to meet the rest of our tour, only 4 other people showed up. Our number now totaling 8 for the entire tour.

For the next week, we walked the Land of the Bible. It was hard to believe our eyes were actually gazing upon the possible Tomb of Jesus, and the Garden of Gethsemane, where He sweat drops of blood, while he earnestly prayed all night over what He was about to endure on Calvary, the Temple Mount where Solomon's Temple once stood, and so many other amazing biblical sites. It was obvious to both of us, the Holy Land had captured our hearts, and we knew we would never be the same.

Upon our return to the States, we immediately began to look for ways to become involved with Israel long distance. Putting our finances into ministries that blessed Israel in many ways. But, our hearts desire was to return, not to tour, but to serve. We looked into a ministry to Israel at our home church. We love the people and the work they were doing for Israel, but neither of us felt it was where we were called to put our efforts. So we continued to wait on the Lord.

In 2009, we were impressed to change churches, which was a surprise to us, because that was not something we were contemplating. I was thoroughly involved in the music department at our church, and leaving was disconcerting to me. I had developed so many special relationships with many of the ladies I sang with. However, after several weeks, we made the change, and God assured me He would keep my relationship with my dear friends safe. He has been faithful.

Within 5 months of making the change, we were blessed to accompany our Pastors, Randy and Stacy Harvey to Israel. He had been invited to speak at 2 first generation Arab Christian Churches in the Haifa area, New Covenant Assembly (Pastor Yousef Dakwar),

and a church in a suburb of Haifa (Pastor Marwan Beem).

These precious Christians, welcomed us in a way that was humbling to all of us. They received us as if we were family. Now, Frank and I, as well as our Pastors, were falling in love with the people of Israel, the true Living Stones. We were hooked, and we new this was only the beginning.

We visited the Internet Radio and TV Studio where Pastor Yousef Dakwar (New Covenant Assembly), leads a team of gifted and talented Christians from his church and the community, in broadcasting the Gospel, 24 hrs a day through out the Middle East. We viewed incredibly professional short films, shown on YouTube, with every day problematic subject matter, which always ended with a Gospel message. The work they did to evangelize, on very limited funds, is nothing short of miraculous. We immediately knew this was fertile ground for seeding.Though God provides for them, donations are crucial.

A third Church, which we are also very excited to be connected with is, Kehilat HaCarmel (Carmel Assembly). A thriving and growing Messianic Congregation on Mt. Carmel, whose Saturday Morning services are unlike any I have experienced. These three Congregations (one Messianic and two Arab Christian), fellowship and worship together, as well as serve one another. It is beautiful to see. The "Wall of Separation" does not exist here. It is what true Christian community is all about.

The months leading up to this trip were bathed in small miracles that confirmed we were on track with the Lord. Out of that trip "Israel Tours and Ministry" was born. We are proud to say that this coming June we will be taking our 10th tour to Israel. We began with our home church and have now expanded to the rest of the Christian community. However, we are still under the covering of our Home Church, The Crossing Church in the Woodlands, TX.

We expect to continue in the work God has called us to, which also includes humanitarian efforts in conjunction with "Hand of Love Ministries", run by George Kawanah. We recently joined George's effort to supply medical attention and every day needs, to the poor and needy in Israel. We are also in relationship with the Jewish Agency in Jerusalem, whose main focus is to help Jews from all over the world return to the Homeland. We trust the Lord to continue to lead us and expand the work He has called us to, until He redirects our life, or until our Lord returns.

Our vision is to bring people to Israel, introduce them to the Land and most importantly the People, with the hopes that God will touch their hearts to get involved. However, Frank and I do not feel called to try to sell you on the subject, that is up to God. We are all called to do something for the Kingdom. We are not all called to the same thing. You may come with us to Israel and love every minute of it, but you may not be called any further than to have experience the Land of the Bible, because God is calling you to  something else. But some of you will feel strongly called and say yes. If only one of you feel that tugging in your Spirit, then we have done what God has called us to do.

Our call to Israel in not a job, it is a ministry. Our goal is to provide the most affordable first class tour we can and we are constantly refining our tour so that you will have the most inspirational experience possible.

God bless you as you prayerfully consider joining our 2020 Ministry Tour to Israel.

*For more information, please fill out the form on our "Contact Us" page, and we will get back with you.